Stronger than I knew 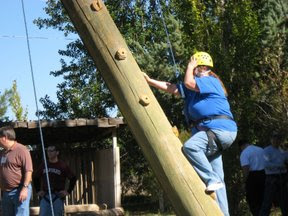 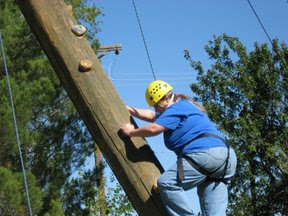 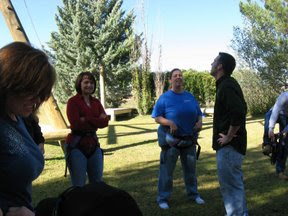 As part of Leadership Roswell (a 9 month leadership training program I'm involved in) I participated in a Ropes course. When I get some pictures, I'll post them. The Tower was a pyramid shape with an assortment of telephone poles at various angles. The three corners had "rocks" to climb up. (Sort of like a rock climbing wall.) As you get higher up, you have to switch logs, or go on ropes. At the top of the tower is a platform.

To go up, we had to put on a harness, and then we were tied to an anchor rope. The guys holding the ropes (and our lives!) were awesome. They were called "Bayles" or something like that. (I didn't quite catch it.)

I've heard of these courses before. And I would have expected to be terrified. But I wasn't. I was excited and anxious. I wanted to see what I could push myself to do. After a few team building activities (including swinging on a rope from a platform into a hula hoop on the ground!), it was time to climb the tower. Three pretty confident (and athletic) guys went first. (There were three sides to climb.) I was in the second group--all women. But the other two women's husbands had done the class last year. They were highly motivated to reach the top!

I was a little afraid at first. After I climbed up a few "rocks", they had us fall on purpose so we would know what to expect. Then we started again. I had set a goal of making it to where the first sets of logs were tied together. (About 1/3 of the way up?) I got stuck about 3 feet below that. I couldn't get a grip on my foot hold, and I couldn't reach the handhold well enough to get a grip. But I didn't give up. I tried several times. I went down a couple of pegs to get a better grip. I held on and push and pushed. I reached up and curled my fingers around the next rock, but I just could not pull myself up. At what seemed like hours (!), I told my Bayles that I wanted to come down.

But my classmates were awesome. They cheered me on. They encouraged me. They gave me advice about where to put my feet and how to push on. They didn't rush me when I just kind of hung there trying to get up the strength. They held me when I cried.

I'm disappointed that I didn't have the strength to pull myself up higher. But I'm proud that I didn't let fear get in the way. I didn't give up at the first sign of pain. And I pushed on.

After that, I went on the swing. My harness was attached to this rope that was attached to a wire. My classmates pulled me up (only about 1/2 way---not that brave!) and, when I was ready, I let go of the rope holding me up. And then I swung?, swang? swinged? I SAILED through the air. WOW! That was fun!

Next year, I'd love to go back and try it again. Especially if I am successful in losing 100 pounds.
Brilliantly submitted by Unknown around 6:08 PM

Thanks for adding my button! You are now entered twice in the Black Out Curtains Giveaway.--Regards, Mary @ Adventures in Mommyland

That rocks! You are indeed brave. I haven't done anything like that since my college days. Thanks for entering a Momtrends contest.